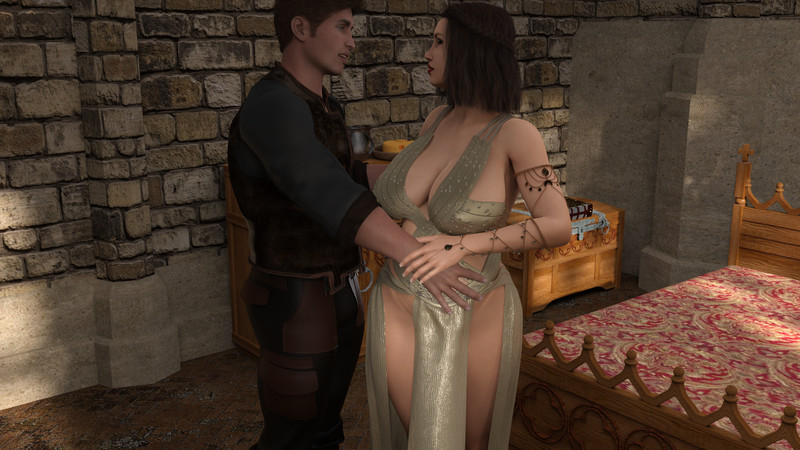 A prince, an escaped prisoner, a usurper, a sexual abuser, a fighter. Karder Dal-Arouya is many things but has one goal in life: to conquer the empire stolen from him by his treacherous queen mother.
Guide Karder on his adventures to reclaim his throne. On his quests you will meet friends and foes, powerful beasts and sexy rulers. Dominate your defeated foes and decide whether you want to use and abuse them for your dark pleasures or convince them to aid you with their skills and knowledge.

-A new quest: infiltrate the fiefdom of Hawatia in order to sway a crucial parliament vote which will leave the fiefdom vulnerable to attack. Solve a murder mystery, fuck, bribe, fuck some more, blackmail and fight your way to political dominance.

-A hot new wench: queen Sumia is voluptuous and ebony skinned, arrogant and proud. Persuade her to join your cause or use her body for your dark pleasures.

-Per Subscribers vote: revisit the oasis of Ziruan and offer Fahda the moneylender an offer she can’t refuse (only if you didn’t rape her or Alam or murdered Domia.)

-New! a Chicken button in 1:1 combat to instantly win (Subdue) the melee.

-New! all conquered fiefdoms have the same color, easier to identify which fiefdoms are under your control and which are not yet.

As for content, I’ll start by saying that 0.3 is as big as the two previous releases combined. Second: I want to stress that *your old saves will not work*. Vae Victis is a game, not a VN, and as such the game’s infrastructure changes as it evolves. If you wish, you can use Skip ‘n Win to quickly jump over the miniquests you have completed.

– New! Gallery for replaying scenes you already played. Courtesy of Niv-Mizzet the Firemind. Thanks man!
– New! UI overhaul by the very talented Kia. There’s a lot to love about the new UI but my favorite is the Send Troops slider.
– New! Impregnation flow. When you fuck a (former)ruler wench in your palace or your dungeon there’s a chance she’ll get pregnant. If she does, you will be notified and for for a few turns you’ll be able to have pregnant sex with her. Once she gives birth she will not be available for a few turns as she rests and then she’ll become available again. Impregnation is currently reserved for wenches only.
– New! In 0.2 I made the mistake of hinting that Alam and Domia from the oasis accompany you to your palace, so in 0.3 I owned my mistake: both are available in the palace if you take them with you. I’ll be more careful next time

– The 1:1 RPS combat was streamlined and a very short tutorial is now available after you escape jail. Defensive attacks are considered to be Subdue attacks, so when meeting a new Subdable opponent you can (and should) play a few rounds in Defense mode without ruining the Subdue effort. Furthermore, Subdue attacks cause much more (Subdue) damage but leave you more vulnerable to damage so learn that wench’s attack patterns before subduing her!
– All wenches now have rigid attack patterns instead of an affinity to choose one attack.
– Obedience and Morale were improved. Details below: TL;DR: if you garrison more than 30 troops your Obedience in that fiefdom will go up.
– Originally Fort and Gold Mine multiplied the fiefdom’s Troops and Gold yield but were useless if the Troops/Gold stat of a fiefdom was 0. They now yield a small amount even if the Troops/Gold stat of a fiefdom is 0.
– Cool surprise scene after you conquer all available fiefdoms (Oryeonguk, Marbia and Tinpigia).
– On the left menu you’ll find a tab called Info. There’s a link to the walkthrough there.

Remember that old saves will not work, use Skip ‘n Win to quickly finish miniquests you have played before.

How To Install Vae Victis

Gods Call Free Download Latest Version Gods Call Download Walkthrough + Inc Patch Mod Apk For PC Windows, Mac, Android – What if you woke up in the middle of the desert without any clue as to … END_OF_DOCUMENT_TOKEN_TO_BE_REPLACED

The Writers Visit Free Download Latest Version The Writers Visit Download Walkthrough + Inc Patch Mod Apk For PC Windows, Mac, Android – It’s up to you to use your niece to help grow your harem.. Developer: … END_OF_DOCUMENT_TOKEN_TO_BE_REPLACED