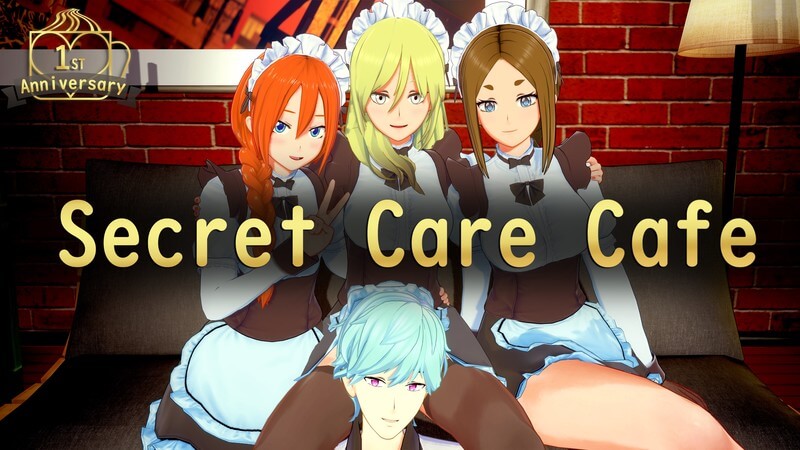 In the Secret Care Cafe you are the owner of the new cafe in town. But it’s not your everyday cafe shop, this place has a special care program to make it’s customers really enjoy their stay.

0.7.6 Public:
– 1 new nsfw event – Cynthia’s talk – this event have few variations of text depending on your relationship with other girls and if triangle pin is on or not (more variations will be added after more relationship statuses for girls will be added)
– 1 new event – Rai’s benefit event increasing popularity gain for maids and cafe (that cg added to Rai’s aftermath in gallery to save space for future events)
– 1 new perk for Ame – Stalker, at the end of each day she finds a random item, depending on the perk’s level.
– added possibility to change the text font during an events in title menu in settings
– added possibility to change the speed of the text being generated (normal, fast or instant) in title menu in settings
– added visualization of text generation in settings
– updated value descriptions for the back rooms
– now you can give items and use benefit events even when you already used actions in chat menu
– very slightly increased starting statistics for girls to ease up early game.
– fixed a bug with clients getting stuck at the doors
– fixed a bug where the game didn’t register you talking with a client as an action
– fixed a bug where you could talk with maids all the time with no restrictions
– fixed a bug where Ame’s give number didn’t calculate to some events (but was calculating in clients book)
– fixed a bug that sometimes locked girls from being used at stations
– fixed a bug that sometimes made not spawn any events (black screen)
– fixed a bug creating double instances of settings while in options
– fixed a bug that prevented text box appearing in Rich Boy’s benefit item icon and had problem with activation
– few small visual adjustments and changes

How To Install Secret Care Cafe