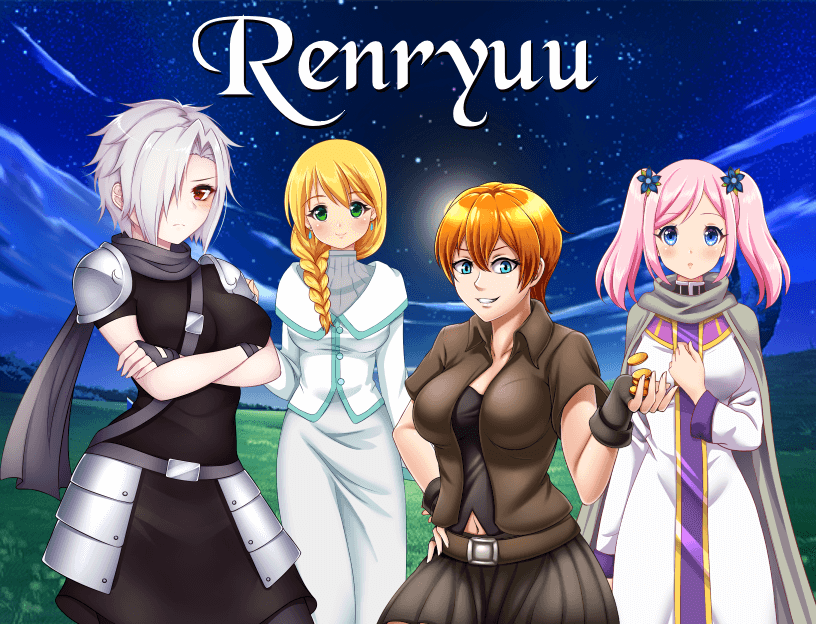 Renryuu: Ascension follows the story of Ryen, a half dragon-half human. After some sudden events Ryen becomes the King of his country and starts his dutys as the King in the castle while also traveling around when needed to take care of many problems inside and outside of the country.​

v21.11.14
– After finishing all previous events with Mike for the rebellion in Dorgania, or Sinrul to help the government, you can now trigger a new event with rebels when you enter Minsk Harbour from the worldmap.
The event will advance the story about the rebellion, and give you a quest at the end, which can’t be finished yet.
– After the events with the rebels at Minsk Harbour, if you’ve advanced the main story far enough, you can find Negi near the entrance of Minsk Harbour. He’ll start events about Lucilla, with an optional CG scene.
– New anubis character sprite images
– [After her class change to Berserker, Vampire can now use whip class weapons.]
– Added the notes [Good path] and [Evil path] to the choices for Irinlia after her events at Millwater, to make it clearer, which choice gets you on which path.
– Updated the skilltree background images for Ryen, Trey, and Brad, so that they show the full body CGs now instead of the face images of the characters.
– Added Honey as possible drops from hornet monsters. [I know that it would make more sense with Bees, but I only have hornet monsters at the moment.]
– Added the item Mead, which can be crafted with Red Wine and Honey when you have the Green Cooking Book.
Mead can be consumed to recover 30% MP of all party members during and outside of battles, but has a 50% chance to make the targets tipsy.
– Added the item “Hellhound dungeon map” to the area in front of the hellhound village, to make finding the entrance/exit easier.
– The menu isn’t disabled anymore when you enter the dungeon before the hellhound village.
– The chief of Ebron will now auto trigger his events about showing you the way to Ebron when you enter the blacksmith in Aldlyn with Mirel in your group. He’ll also bring you directly to Ebron, without waiting for you in the corner of Aldlyn first.

v21.08.21
Changes:
– When you’ve done her previous events, Mirel will give you the new quest “About Racism” at the sleeping chambers. This quest brings you to Orchel, where you talk with several elves.
The dialogs with Phyrra and Seldanna will each give you a new quest. Talks with Phyrra again, after her dancing CG scene, to get another CG scene.
Talk with Mirel at the sleeping chambers again after fixing the old bow with Seldanna’s help for Mirel’s first time CG scene.
– The lengthy quest “Orchel Trading Route” is now available when you talk with Saphielle in Orchel. It requires:
1. The “About Racism” quest from Mirel must be done.
2. The “Old Bow repair” quest from Sledanna must be done
3. The “Alchemy Maniac” quest from Zentha must be done
4. You must’ve had the dialog with Darude during the main story, where he gave you the permit to enter Dorgania. (Should be a given when you’re at Orchel).
5. The storage building near the Red Keep on the overview map needs to be constructed.
6. You must’ve repaired the Bitterroot farm.
7. You must’ve finished the events about the tribe elves at Orchel
8. The border to Dorgania needs to be open on both sides.
9. The party needs to know the location of Ebron
10. You need the first events with Elina, and Maid Louise, to the point where Elina is now standing at the noble living quarters, and not in your throne room anymore.

Other changes:
– Fixed the combination of Magic Seeds with Mixed Fertiliser in the nature raid. It was not supposed to result in Unusual Weed.
– Fertility Potions can’t be purchased in Aldlyn anymore. Instead, you get the recipe to craft them during the new quest with Zentha in Orchel.
– The tree for the construction of Kayelinth’s new farm on the overview map now sparkles, to ensure that people don’t miss it.
– New full body CG for Phyraa (elf in Orchel)
– Fixed the “Destroy Undead” skill.
– I changed the CG room pages for Elves 2 and 3 about the Orchel elves. They’ll now appear in the CG room after their first dialog, instead of appearing all at once when you advance the events of the refugees.
– Fixed the Divine Favor skill to target the entire group instead of just 1 ally.

How To Install Renryuu: Ascension

Of Birds and Bees Free Download Latest Version Of Birds and Bees Download Walkthrough + Inc Patch Mod Apk For PC Windows, Mac, Android – Once upon a time, in the Great Plains, there sleeped a great … END_OF_DOCUMENT_TOKEN_TO_BE_REPLACED