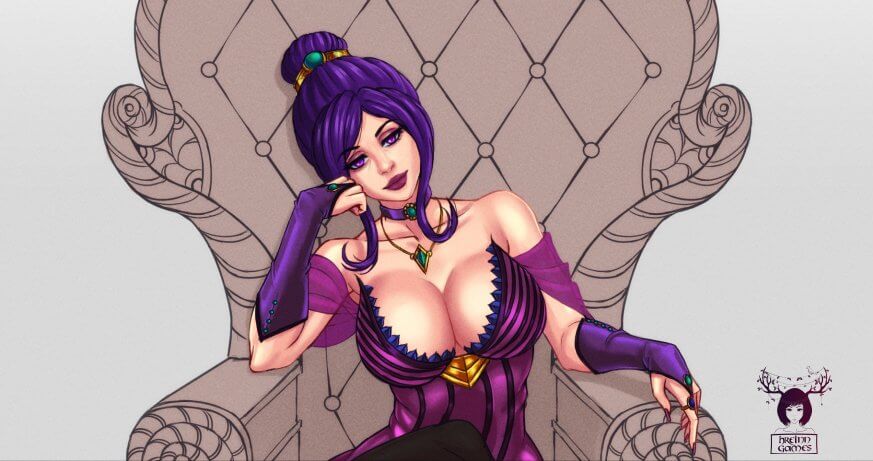 After centuries of struggle between races, humans have established the fearsome Kingdom of Lundar. Fueled by ambition and hunger for glory, the human forces are on the verge of completely annihilating all territories controlled by creatures that have not become vassals. The last hope of fighting off the human armies, a vast monster horde, has been defeated, leaving Lundar as the master of all. Their outside enemies defeated, the noble families and military factions of Lundar have quickly turned on each other in an internal struggle for power. In this vicious conflict, not even religious or family bonds will be spared.​

– New CG scenes!
Vehlis Captured – Vehlis has come afoul of some shady forces, and has been imprisoned somewhere in secret. Sabia has to rescue her in time. This is the biggest scene we have done both in art and writing, it is in essence a extended bad end if you fail to save her in time. It is 7000 words and 259 layers.
Neve/Sabia/Orc – Neve helps Sabia retrieve some information from an orc. This quest is both for sub and dom, it has extra content if you are Tekrok allied or have dealings with the Shaman.
Avion/Kira – Sabia and Avion have some disagreement on which is the better race, and Avion makes sure Sabia knows the proper answer. Kira enjoys having a girl with a backbone around, but still likes to be in control – and likes to make sure Sabia knows it. Which scene you get depends on whether you are sub or dom.

– New Quests!
Rescue Vehlis – Vehlis has been imprisoned by some nefarious forces. With Alioch’s help, Sabia needs to discover the location and rescue Vehlis before it’s too late.
Attack the Bandits – Kira’s hunger for larger territory and disregard of the other bandits has grown larger. She enlists Sabia’s aid to clear out another bandit camp. It’s a good opportunity for Sabia to earn more favour with the dangerous Vegardan.”
Fire! – One of the tents in Grok og Dar goes up in flames. With a piece of evidence pointing to outside forces, Sabia investigates. A Tekrok aligned Sabia will have a different start ot this quest.

– New Character!
We’ve excited to debut one of our new characters, someone from Sabia’s past that proves to be a thorn in her side for the moment, and likely into the future. She is from the desert to the south, and is a dangerous mage. We’re pretty happy with the design, and think you guys will like her too!

– Save notes!
Go inside Sabia’s tent and Check Progression. There’s a new button to add a Save Note that will get attached to your save file slot for easier identification of your saves.

Public Release:
– The public release will hopefully include the Quest Log, there were coding issues with getting it to work without breaking saves.
– The new male sprites will be included in the public release

How To Install Kingdom of Deception

Of Birds and Bees Free Download Latest Version Of Birds and Bees Download Walkthrough + Inc Patch Mod Apk For PC Windows, Mac, Android – Once upon a time, in the Great Plains, there sleeped a great … END_OF_DOCUMENT_TOKEN_TO_BE_REPLACED