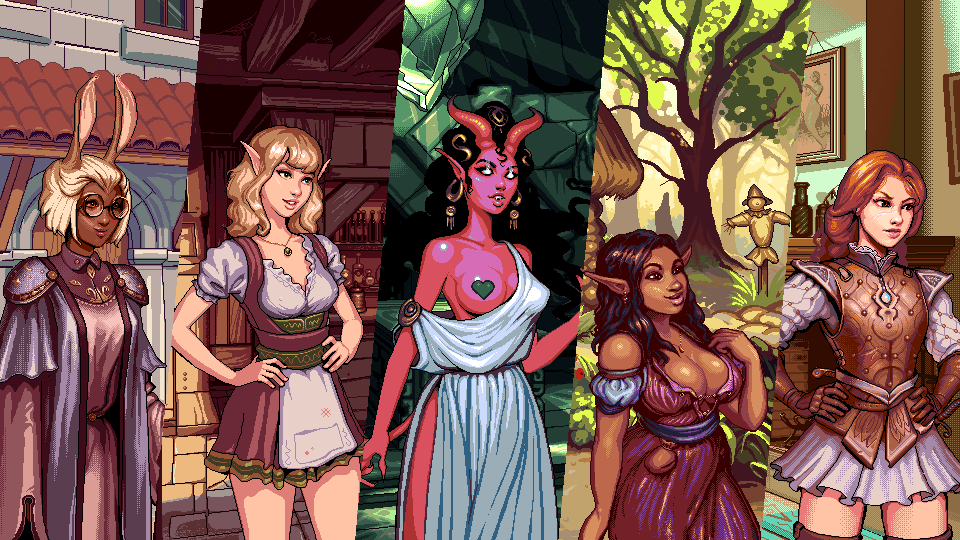 In this adventure game, you’ll take the role of a young adventurer who returns to his childhood village to reclaim a house inherited by his grandfather.
On a sudden twist of fate, you find a mystical amulet in your newly acquired house, and its simple touch puts in motion a chain of events that will lead you to meet a mysterious woman who has sought refuge in your home.

Some scenes are not available through the Journal and will be added shortly in a hotfix.

Android Installation: If you download the .apk, please make sure that the filename hasn’t changed after the download, some phones change the extension to .zip for security. If that’s the case change it back to .apk and install. If this doesn’t work, try using a different file manager to open the file.

Dev Notes: There’s no Naamu clues at the moment, to progress through the new content go into Janet’s store at the mornings. (As long as you had completed both Janet’s and Crystal’s questlines)
All the items required can be found in the dungeon (all can be found before floor 14).

v0.19.1 Hotfix
Added Ki-ki’s and Luna’s first scenes to the Journal.
EXTRA ART added to the achievements gallery.
Fixed the “reached X level” achievements not triggering if you surpased that level beyond their introduction.
Dungeon enemies have now a chance of dropping items once defeated.
Fixed a crash triggering in the GAME TIPS submenu.
Bugfixed some dialogue issues.
Very slightly improved file size.

How To Install Aurelia

Of Birds and Bees Free Download Latest Version Of Birds and Bees Download Walkthrough + Inc Patch Mod Apk For PC Windows, Mac, Android – Once upon a time, in the Great Plains, there sleeped a great … END_OF_DOCUMENT_TOKEN_TO_BE_REPLACED